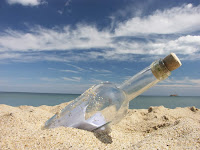 If you, a writer, were dying and you had time to create a last work, cork it in a bottle, and throw it into the ocean for someone to discover later, what message would that work portray?
I’ve thought about this long and hard since I listened to and watched Randy Pousch’s The Last Lecture. The doctors diagnosed this Virtual Reality professor of Carnegie Mellon University with pancreatic cancer in 2006, and he spent the last two years on earth lecturing, leaving a legacy that has inspired a multitude. He didn’t sulk. He didn’t give up hope; he handled the inconveniences of his disease with a positive outlook, even though he would leave behind three young children and a wife who adored him.
Think about it. What would you want people to know about you if you weren’t going to be around for long? What could you possibly write that would sufficiently portray who you are as a writer? Would you want to leave something that would last through time, to be read like the works of Shakespeare and Chaucer in classrooms around the world? Or would you direct your words to a more intimate setting, like your family? Would you leave out certain words or ideas that might taint your readers' minds? Or would your words become more potent, more angry, more shocking?

After much thought on this question, my answer is this: I would write exactly the book I'm writing right now. Maybe I would better use every spare moment I have to get the words down on paper, to complete the task more quickly. Maybe I'd find more courage to consult with experts and find beta readers, realizing that what I want my reader to know is plausible if they will just keep an open mind. The thought excites me, fuels my muse, and silences the negative voices that would hold me back.

For I am a writer and a human being, and I have something to say. Thankfully I don't have ten tumors vying for my time right now, but the question spurs me on to treat whatever time I have left on this earth as a laboratory for creating the best I have within me.

I hope the thought does the same for you.
Posted by Peggy Shumway at 4:41 PM

I think I would have to say the same thing, I would write the book I am writing now. Since it is loosely based on the life of my mom - I consider it a legacy for our family. Yes, we are writers and we have something to say.
Great post.

Jan-It sounds like your WIP is of great worth. Leaving a legacy for family is the most important thing anybody can do in life. Good luck on your success!

David-I saw one of your comments about getting blurbs for our books. You included Rod Meldrum and Bruce Porter, and I thought we might believe in some of the same things. When I went to your blog, I was sure of it. I wrote a B of M novel a few years back, but when I went to a Bruce Porter lecture last year, I realized my setting was in the wrong location. I hope to send Vestiges to a NY publisher to introduce the possibilities.

Thanks Peggy-yes we do. Bruce is awesome, we have known each other for a few years.

Best of luck with Vestiges.

Peggy,
Thanks for the Follow and your blog is beautiful. This post was a great reminder to not squander the time we're given. THanks for sharing!

I need to read The Last Lecture, but haven't gotten around to it yet.

My final manuscript would need to be my first. I got into the writing business to tell Hatshepsut's story the way I thought it needed told. I'm still on that mission!

David- Yes, Bruce is great. What I'd give to have half his brain!

Wendy- Time is precious, isn't it? Thanks for the compliment and thanks for stopping by.

Stephanie- The topic of your book looks interesting. Thanks for stopping by.

THE LAST LECTURE was one of the sources I used in my presentations at our city's Sci_Fi Convention. Remember Captain Kirk & William Shatner were his childhood heroes.

Like you, I would probably write the book I am writing. Or I might walk away from writing as it would part me from the people that I was going to be parted from all too soon.

You don't know until the moment comes, Roland

As much as I love writing novels, I think I would stop them if I knew my death was soon. I think I would choose to spend my time with people I love, DOING things WITH them (instead of sequestered off in my writing cave), and perhaps spend a bit of writing time writing letters to my loved ones to read for years to come.

I have watched his last lecture many times and am grateful for his gift to the world and his grace under pressure.

Roland- You're right. I might want to spend the time with my family too.

Lola- We do hide away when we are writing, don't we? Thanks for stopping by.

I read four posts in a row and couldn't decide which I enjoyed more. I didn't know about this aversion to prologues. This was very useful to learn! And yes, graphic sex can be a bit distracting. Thanks for following me; really glad to be following you. I love your writing style in all your posts--thoughtful and clear.

Yes, I agree, I would keep working on the same manuscript I'm working on right now, but I'd definitely work harder to get it the very best it could be. And I would also write a lot of letters to my family.

we are writers and we have something to say.
Contextual Ad Network India