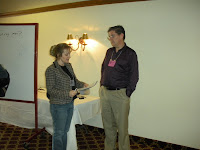 On February 27, I attended the ANWA writer’s conference, Start Write Now, and one of the more humorous speakers, J Scott Savage, commented that writers are odd. To emphasize his point, he revealed his list of oddities: writer’s talk to their characters in the shower, cry over the characters they kill themselves, write down their dreams, and have crazy egos. We all laughed over his slide presentation, illustrating the various quirks. Despite his humor, I’ve thought about his comments over the last couple of weeks, and I’ve come to the conclusion he’s more correct than not.

I came up with my own list of idiosyncrasies to prove he’s hit the mark. I’m sure if you thought about it awhile, you might come up with some weirdness yourself. Please share if you do.
Sound familiar? At all? I hear a resounding, “Yes!!!!” Because writers ARE odd. It’s the nature of the zillions of beasts that roam around inside our heads. But, hey, rather than tame the invasive creatures, I’ll do whatever it takes to get to the end of my novel.
Posted by Peggy Shumway at 9:22 AM

Hahahahaha! I think I'm the oddest writer of all.

Love it! As I'm typing this my breakfast is getting cold.

I'm so disappointed I didn't go to the ANWA conference last month. I've heard so many good things about it. Maybe next year? I just signed up to be a member, and look forward to all it will bring into my writing life.

Welcome to ANWA, Kim. You will love the conferences.