Once Upon a Three-Act Play Structure 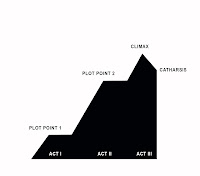 Steven Spielberg has said, "People have forgotten how to tell a story. Stories don't have a middle or an end anymore. They usually have a beginning that never stops beginning." We, who like to write fiction, should pay heed to his message if we want to write compelling stories.

A few years ago, while attending college, I discovered the book called, Interactive Writer's Handbook by Darryl Wimberley, PH.D. and Jon Samsel. The fourth chapter, "Story Dynamics: The Spine Comes to Life," tutors us about the Three-Act Play Structure, and it taught me how to craft fiction. The formula isn't new. It evolved from Horace's five-act plays and has inspired Shakespeare and other playwrights through the ages.

The Three-Act Play Structure’s purpose is simple: to set a spine into the body of a story. We all know the purpose of a spine; it supports the body's musculature and holds us upright. I used to hang a Far Side cartoon on my wall entitled the "Boneless Chicken Ranch" to remind me that my stories needed a spine. In the comic, boneless chickens sprawl haphazardly on the grounds of the farm. The same principal works in our fiction. If we fail to put a story-spine in place, our plot will sprawl throughout the manuscript, bringing us a passel of rejection letters.

Five stages make up the Three-Act Play Structure, helping the author pace dramatic conflict. These stages need to occur at specific times within the story and in specific proportions. The Second Act is longer than the First and Third Acts, and the First and Third Acts are relatively the same size. The ending should somehow connect with the beginning to provide unity. Writers should know how a story will end before they begin so they can repeat a symbol or theme throughout the plot which helps in the unification.

The first stage of the Three-Act Play Structure is the Trigger. This stage occurs within the first eight to ten pages of the manuscript. The trigger jump starts the story, involving characters in immediate conflict and promises more struggles to follow. The trigger does not have to involve the hero. The villain can do the job just as well. But remember, the introduction of conflict must affect the character's head and heart. As the main story changes, so should the inner lives of the players, otherwise the author risks leaving the reader unsatisfied.

The second and third stages of the Three-Act Play Structure are the First and Second Reversals or Plot Points. Many reversals occur throughout a story, but only the first and second Plot Points are mandatory or the story will crumble. The first plot point occurs at about a quarter of the way through the plot in Act One, and the second plot point occurs at about three quarters of the way through the plot at the end of Act Two. These Plot Points take the story and the characters lives in new directions, but the second plot point is where the main character learns something significant about his mettle. The second reversal introduces the third act, leading to the Climax of the story.

The Climax, or fourth stage, is where all action escalates to the main point of the plot. However, the Climax should never answer all of the character’s problems. This allows the final stage, the Catharsis, which the Greeks knew as a type of healing, to tie up lose ends. The Catharsis should be brief. After the climax, readers care very little about what comes after.

The Three-Act Play Structure works, whether writing a novel, a screenplay, or a short story. Remember this structure is a guideline only; a writer doesn't have to be exact, just in the general vicinity, although she needs to use all five stages. More times then not, the authors of my favorite novels have used this formula, and I have committed to mastering all five stages so my novels are of the same caliber. Try restructuring your own work. You'll be surprised how your stories improve.
Posted by Peggy Shumway at 7:00 AM

SEGA Does Not Add Its Own Pixels - Avenue P
As a 토토사이트 result of these, 바카라사이트 all games will include a larger version of their games to enjoy - but they should add the power of Sonic the Hedgehog and toto adventures.